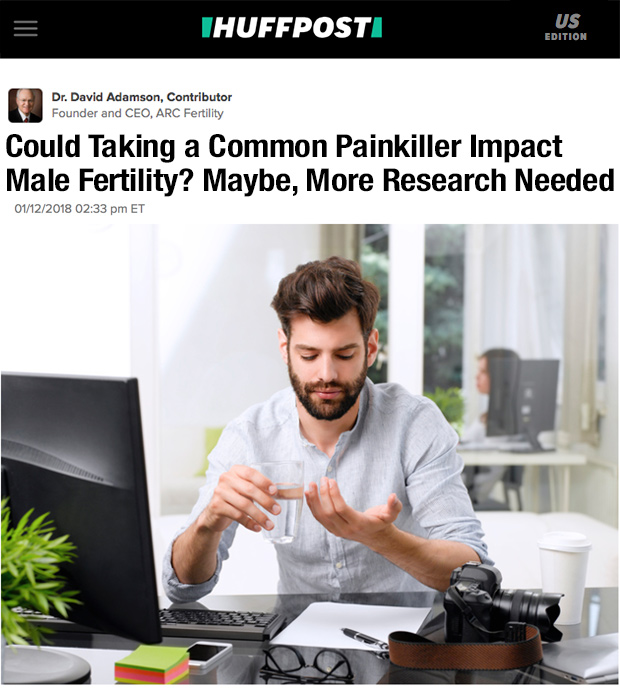 Researchers at the University of Copenhagen decided to examine the impact of ibuprofen on young men without fertility problems for multiple reasons: its widespread use, the fact that male fertility has declined globally in part due to hormone disruption, and results from earlier studies showing male fetal reproductive abnormalities when women took the painkillers while pregnant and disruption of ovulation after taking the medication. This study is the first to examine the impact of ibuprofen on adult men.

Ibuprofen is one of the most commonly used painkillers worldwide, recommended for short-term treatment of aches and pains, injury and inflammation. However, those with chronic pain and arthritis as well as athletes, may take it on a long-term basis and exceed the recommended daily maximum dose of 800mg.

Thirty-one healthy men, aged 18-35 with no fertility problems, participated in the study with half taking 600mg of ibuprofen daily for 44 days and the rest taking a placebo. Researchers found that exposure to ibuprofen – even at this low dose – reduced the levels of testosterone in the men’s testes after only two weeks. Testosterone is needed to produce sperm cells. For those taking ibuprofen, the body overstresses to produce new testosterone in a process known as compensated hypogonadism which can temporarily affect sperm production. There are no symptoms and overall testosterone levels remain the same but the body is only able to compensate for the decline for a limited time.

The new study has garnered substantial media coverage and led some to believe there’s a direct link between taking ibuprofen and male infertility. While lower levels of testosterone could lead to infertility, the study didn’t look at this issue directly. Rather, the small Danish study concluded there is an effect on testosterone levels which can affect sperm production and sex drive – and could lead to problems with fertility. Further research is needed to establish a direct, causal link.

The good news from the study is that once the men stopped taking ibuprofen, testosterone levels returned to normal. A hormonal imbalance can affect male fertility and male factors are the sole reason for a couple’s inability to have a baby fifteen to twenty-five percent of the time.

According to the study’s lead author, biomedical researcher David Møbjerg Kristensen, “Our immediate concern is for the fertility of men who use these drugs for a long time.” Prolonged use could potentially lead to more serious, long-lasting effects associated with lowering testosterone, including primary hypogonadism which affects fertility, libido, and may result in reduced muscle mass, depression and fatigue.

The study has been described by experts as well-designed and an important first step, with more research needed as it only examined the immediate impact of ibuprofen on male hormones over a relatively short period of time. “Further studies are required to investigate whether this mild effect of ibuprofen could significantly impair testicular function in terms of testosterone levels, or fertility, after long term use – this study did not examine effects on fertility,” according to Dr. Ali Abbara, an endocrinologist, senior lecturer at Imperial College London and member of the Society for Endocrinology, who wasn’t involved in the study. Dr. Abbara added the research results should not be a concern for men who take ibuprofen occasionally for pain relief and noted the six-week period is longer than generally recommended for taking the painkiller given other side effects.

Men who have already been identified as having fertility issues and currently taking either large doses of ibuprofen and/or taking it for prolonged periods of time, should consult their doctor about alternative treatment. While more research is needed on this topic, caution is worthwhile if getting pregnant with a partner is the priority.