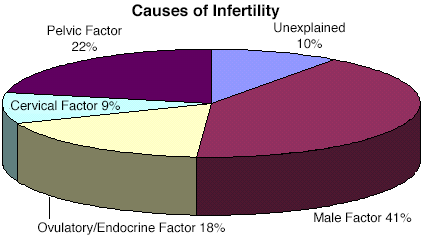 There are a number of fertility tools available to help pinpoint the cause of infertility. After undergoing evaluation through a comprehensive physical exam and medical history, a fertility specialist will initiate a series of specific diagnostic investigations based upon his/her suspicion of the source of infertility. Causes of infertility can generally be classified within the following areas: the female eggs and endocrine system, the female pelvic cavity (tubal damage, endometriosis, uterine problems, fibroids), , or semen quality and the male reproductive tract, or timing and technique of sexual relations. A glossary of medical terms is provided at the end of this page to clarify medical terminology commonly used in fertility treatment.